I do like a marble, I think everyone does as in it’s simplest form it is a reminder of childhood and games we used to play.  Also marbles can be fascinating, frosted ones, ones with swirls in (how do they get the colours in there like that?) and in these days really really fancy marbles with all sorts of designs and colours.  They are wonderful to hold in your hand, that perfect cool round is very calming.

Of course marbles have been around for centuries and I have to confess although I did like playing with them as a child and sometimes finding them in an old bottle dump at school (I am not sure we were supposed to be rummaging around there, but of course as kids we were!) finding the marbles that used to be found as bottle stoppers in lemonade and ginger beer bottles (long before my time I hasten to add!), they weren’t the first thing I wanted to make when I started working with borosilicate glass.  I really wanted to make creatures and small glass sculpture (still working on it, ie the tree that I posted about previously); perfume bottles, bud vases, candle sticks and so many other things, but when I went to learn about this wonderful glass the woman who taught me showed me how to make a marble and I was hooked! By the way, I still want to make all those other things, I just need to find the time to play and am working on that too!

These were the first marbles I ever made (on my course) and I was blown away by the relative simplicity (after all, when you melt glass it just wants to 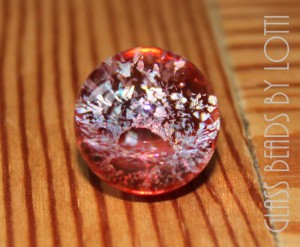 form a ball!) of making a marble!  Ok the flower thing probably isn’t that simple, but really once you have the principles the world is, as they say, your lobster (or is that oyster?).    These marbles were really quite small, probably only about 15mm in diameter, maybe smaller (I have since given them away to family).  I do love the flower ones, I 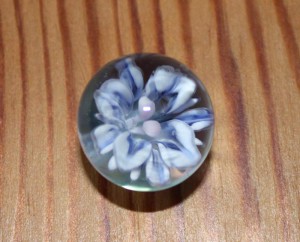 remember the first one of these I ever saw, made by a lampworking friend of mine, I just couldn’t understand A. how she got the marble so round and B. how on earth did she get the flower in there!  I know now (but of course I won’t tell 😉 ).  The sparkly one is also lovely and I still love making these (which reminds me that I haven’t made any in a while, something for the making list!).

I also like the vortex style marbles, where you can look deep into the glass into a world that seems to go for ever.  But, what still defeats me is the marbles with the swirls inside.  I had thought they would be the simplest kind to make (and there is one in the gallery, but it’s not quite there yet), but they most certainly are not. I suppose like the flower marble once you have the principle it will seem easier, like all things really.  One thing that has happened with time is that I am learning to make more complicated flower marbles and bigger marbles (thanks partly to a new torch which is much hotter than my old one and that means I can make bigger pieces! 🙂  My largest marble so far (the pink multi-petalled one in the gallery below) is just over 33mm (just under 1 and a half inches) in diameter and I am aiming even bigger! 😉 🙂

Marble designs are endless, you can do so many things, and people do collect them,  I have seen marbles advertised on glass selling sites for vast amounts of money when made by recognised artists which people collect (you need to sign your marbles in this case and it is something I have started doing, just in case there is someone out there collecting ‘Lotti Marbles’ 😉 🙂 ).

But I make them because I love making them, at the moment it is the beads mostly that earn my living for me, but the marbles are calming to make (most of the time and as long as they don’t try to escape whilst you are shaping them, they can be very very very hot!!!) and calming to look at.  I never cease to be amazed when I open the kiln the day after making marbles to see that I have made something so round and so pretty (even if I say so myself).  So even if I never become a collectable artist, I shall continue to make my marbles and enjoy the simple beauty of them.  I hope you enjoy looking at them too.  The gallery below shows some (not all, as I never seem to remember to photograph everything I make, I really should especially as I don’t seem to have many vortex or sparkly ones here) of the marbles I have made, not necessarily in the order in which they were made though.

Oh and as a postscript, my partner has been making me nice wood bases for my marbles from an old apple tree that had fallen down.  Apple wood is beaut

iful and apparently highly prized amongst woodworkers.  These are still seasoning to make sure they don’t crack, but will be smoothed (if we haven’t done it already) and waxed and available later this year (well that’s the plan!).  Meantime I do have some small acrylic ones to sit the marbles on, because as they are of course so completely round they do tend to do what marbles do, roll! 🙂 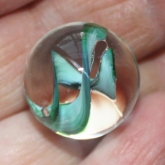 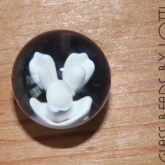 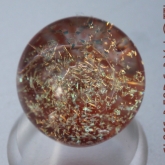 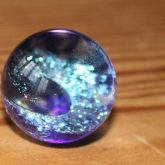 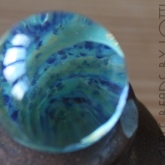 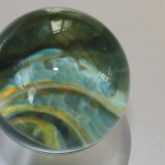 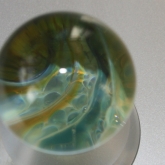 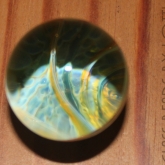 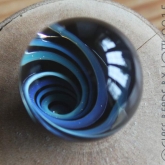 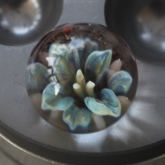 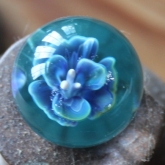 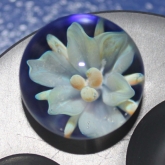 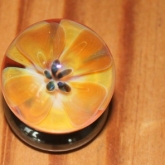 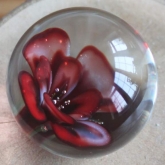 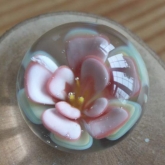 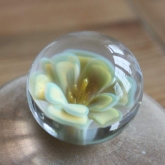 The Magic of Marbles

Currently online via my Etsy shop.  Hopefully later in the year at:-